O Dorsal training (back) is perhaps the most complex between all muscle groups. This is because, this is a group which is out of our field of vision, making it difficult to perform the exercises and correct them if we are doing something wrong. Many people have poor development of their dorsal region due to the lack of adequate stimulation and / or the lack of knowledge on biomechanical principles which can directly interfere with the intended results.

One of the major problems in training the dorsal is differences in the grip footprints and how they can directly interfere with one region of the back being more activated than the other. Knowing how to use the different types of handles and the footprints on these handles well, you will already be more than 50% in improving your back training.

A clear example that the positioning of the hands and arms can interfere with back training is in the scapular movement. Depending on how you take the handle in the Pulley exercises or in the Fixed Bar, for example, different regions of your back will be activated and this can mean an improvement in your training or a total failure.

This occurs in all dorsal exercises, but as the exercises in the puller (pulley) and the fixed bar are the most common and used, in this article, we will talk about them. However, you can use some of these ideas for paddling exercises as well.

In this article we will cover the most traditional footprints so that you can understand the basics and the principle of the subject, but know that there are many other possibilities that can be considered and applied, ok?

Is it possible to isolate a muscle or a dorsal region?

I often say that a layman is one who thinks it is possible to “isolate a muscle”. We know that, in practice, this is impossible, because movements occur in muscle chains and it would only be possible to promote the contraction of a single muscle in an isolated way if we were in the laboratory and made a section of it.

It couldn't be different with the dorsal muscles. Any exercises that involve pulling will necessarily activate muscle groups in that region. It would be too long for this article to talk about the function of each of these muscles, but you can check this out in any good anatomy and / or biomechanics book. But be aware that, in general, all of them are directly, or indirectly, involved with scapular retraction, which is the main movement to be considered in the work of dorsals.

But, if we know that it is impossible to isolate a muscle in any exercise, would it be a waste of time then to vary different types of footprints and angles in back training? The answer is NO!

Although we were unable to isolate one muscle or another during the exercise, the differences between footprints allow us to place more emphasis on one region or another of the dorsal. Positioning the arms and forearms in such a way that a region is more, or less, activated makes it possible for us to promote greater aspects of density, greater aspects of width, reach deficient points in the dorsal muscles, among many other possibilities.

So, let's learn about the main types of footprints that exist in the work of the dorsal muscles.

Pronated footprint (open and closed) from the front

This is a very basic grip that requires the latissimus dorsal in particular, as this is a muscle responsible for adducing the shoulder blades and also depressing the shoulder, which are the main movements of the pull from the front.

A open footprint allows us to work more in the lower latissimus dorsal region. This is usually an exercise for “back width” rather than “thickness”. The more open the footprint, the more you will be working on the lower and lateral region of the great dorsal.

It is important to point out that if you make footprints that are too open, you are damaging the joint capsule of your shoulders too much and this will also cause unnecessary compression on the rotator cuff. So don't use too much outside your shoulder width.

Pronated footprint from behind (neck)

Much like the previous pull, the difference between it and the first is that we do this behind the neck. What's the advantage in that? Some would say none, because the compression on the shoulders and the rotator cuff is huge.

However, if the individual does not have deficits in flexibility and also has an adequate strengthening of the shoulders, there is nothing wrong with that. Even advanced individuals NEED to stabilize the shoulder blades well in order to be successful in this movement and avoid injury.

A advantage of using this pull is that there are no robberies with the lower back, in the column leaps in the concentric (pulled down) phase of the movement.

At muscular solicitation, it affects rhomboids a little more, because this is a movement that requires greater adduction of the scapulae. Together, more muscles are worked in the medial region of the dorsals such as the round ones (major and minor) and also the subscapularis.

Footprint open from the front with bar D

The D bar or Roman bar, is practically the same width as the bar that we use for the pronated front pull, the biggest difference being that your hands will be in a neutral position.

As the footprint remains open, we were able to recruit the lateral part of the latissimus dorsal, but even more effectively as we removed the medial muscles of the dorsal region a little more.

In addition, this may be an option for people who do not have pronation and / or complete suppression of the forearms, preventing unnecessary stresses from being avoided.

The reverse footprint is a variation of the footprint pronounced from the front: It is performed with the palms of the hands facing you and not forward.

This allows you to have a greater range of motion (both in the eccentric and in the concentric phase) and to further depress your shoulder blades. With this, we were able to work in a unique way that final and medial region of the great dorsal, close to your waist. The latissimus dorsi muscle is extremely large and this grip allows us to work it through.

The supine grip also allows for the use of a greater amount of force, making the load highly valued here. Obviously, you must maintain control over it, especially in the eccentric phase (returning from exercise to the beginning) of the movement so as not to lose the benefits of exercise and at the same time avoid possible injuries, such as ruptures in the biceps.

The closed grip with a triangular handle is also an excellent movement to use force, since we have the biceps in a position that they are stronger and this will assist in the movement. I must just remind you that the biceps should not be the main muscles of the movement, only supporting. 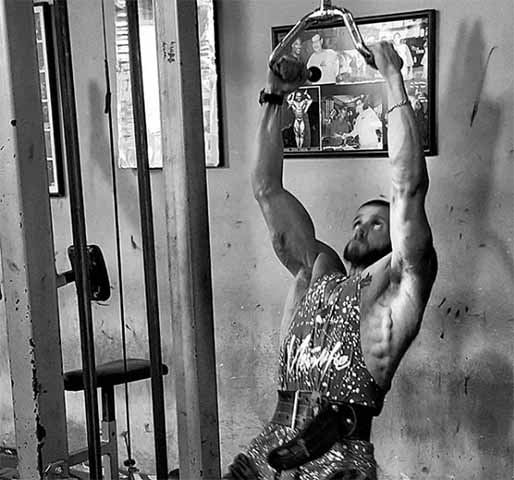 The pull with a triangle is a typical thick exercise of the dorsal. It allows you to work the rhomboids and the medial part of the dorsal well. Having a very good range, she can recruit more the middle part of the back or the lower part.

All of these principles mentioned above also apply to the fixed bar. The big difference is the degree of difficulty (greater on the fixed bar), due to the need for balance. In addition, people with less strength and / or heavier may have even more difficulties with the fixed bar.

Therefore, it is important that it is inserted progressively to give you a complement of basic work, which is essential for various capacities of the body (balance, control, etc.), in addition to the physical development itself, of course.

In this article we know the different types of footprints to use for back training and we could better understand how to work our back muscle more broadly and completely.

Knowing which are the regions most activated by each type of footprint, you will be able to work your dorsal training better and correct any flaws he may have.

Now make an assessment of your shape by analyzing your back and see which region needs more development and choose the right type of footprint! You can already see good results in your next workout!