Barbell, reverse and hammer: Know the difference between the exercises!

O biceps it is one of the most coveted muscles by us men in a weight training gym. Having big, dense and defined biceps is the dream of any male bodybuilder… But how do you make this dream come true? The answer may lie in the thread exercises, such as direct thread, hammer thread and reverse thread.

The thread exercises are the best known when it comes to the biceps workout. However, despite being well known, few people know what are the differences between these 3 types of threads. Would you know what they are?

Although the biceps muscle is a small muscle, composed only of 2 heads, we must know that varying the exercises, the types of footprints, the angles and etc., will cause the exercise to focus more on one part of the biceps or another. And this is very important to know when it comes to “creating a symmetrical muscle”, that is, that they have symmetry in all their heads.

Therefore, in this article we will learn that, although you may seem, 3 biceps training threads have different functions and that can be used in the same training (or in different training) as long as they are adequate with the training synergy in general and the goal.

A direct thread it is the most basic exercise, known and fundamental for the biceps brachii, it does not recruit them in an isolated way, but recruits all the flexors of the forearms (superficial and deep muscles), the brachioradialis, the brachialis and the pronator teres.

A direct thread it is performed with supine hands, therefore, the supinator muscle is one of the main stabilizers of this movement. This supination causes the biceps to be recruited in a greater proportion than the other muscles mentioned. THE direct thread allows work of both the long head and the short head with practically the same emphasis.

Many people believe that it is possible to recruit more of the short bicep head by making more open footprints (distance between one hand and the other), but this is a mistake. As the ulna is a hinge-type joint, it works on only one axis, so opening the arms more or less will only increase the stress of the joint ligaments, and nothing more in terms of muscle recruitment.

The ideal distance between one hand and the other is approximately half a span from the medial part of the legs. If you use the width of the shoulders as a reference it is already a good size too.

The direct thread, being in a fully supinated position, makes the flexors of the forearms quite activated, which is why many believe that it is not necessary to do specific jobs for this region, precisely because of the capacity that the direct thread has in request it.

COUNTRY >>> Three (3) Big Myths When Carrying Out a Direct Thread 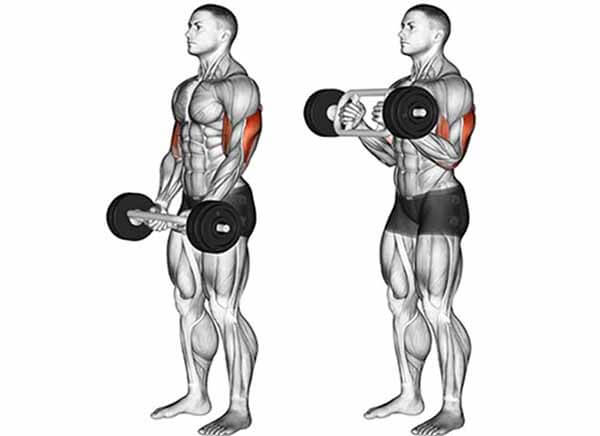 A hammer thread it is usually used as the last exercise in biceps training, but they can also be used as a first exercise in only the first two cases:

The hammer thread can normally be performed with dumbbells, with the H bar or with the rope, on the pulley. However, I think that in terms of reaching the brachioradialis more, the dumbbells are better. If the focus is on the brachial, the rope on the pulley and the H bar may be more viable options as they do not require much control in movement and allow for better stabilization.

The reverse thread is the “reverse thread” exercise, that is, the execution is the same, but with the forearms in pronated grip, that is, with the palms of the hands facing down.

The focus of this exercise is not the biceps, but the muscles of the forearms (especially the brachioradialis) and the brachialis, in smaller proportions.

It is not by chance that much smaller loads are used when doing the reverse thread, as this is an exercise that removes practically all the activity from the biceps and causes the whole load to be thrown in the brachioradialis, which besides being smaller are also much weaker muscles.

In the reverse thread, we usually use the EZ bar, for the sake of comfort and safety of the handles when moving. However, if your pronation is complete, there is no problem with using the straight bar.

Normally, the reverse thread is also used as a finishing move for the workout, but this is not mandatory. It can also be used for pre-exhaustion.

When to use each thread?

Therefore, with this tip above, the use of each thread will depend on your needs. For example, if you are feeling that you need to improve your forearms, as they are very disproportionate to your biceps, the correct thing would be to use the reverse curl. But if you want to train your biceps completely and, in addition, also train your forearms, the use of the barbell is the most suitable.

Everything will depend on what you are looking for your training at this moment and what goal you want to achieve.

In this article we can see that often some exercises, despite being quite similar, have completely different functions. That is why knowing each exercise and its applications is essential to develop a good weight training.

I hope that you can now use the thread, barbell, hammer and reverse screw exercises correctly in your workouts and periodizations.

1 comment on “Bar, Reverse Thread and Hammer: Know the difference between the exercises!”